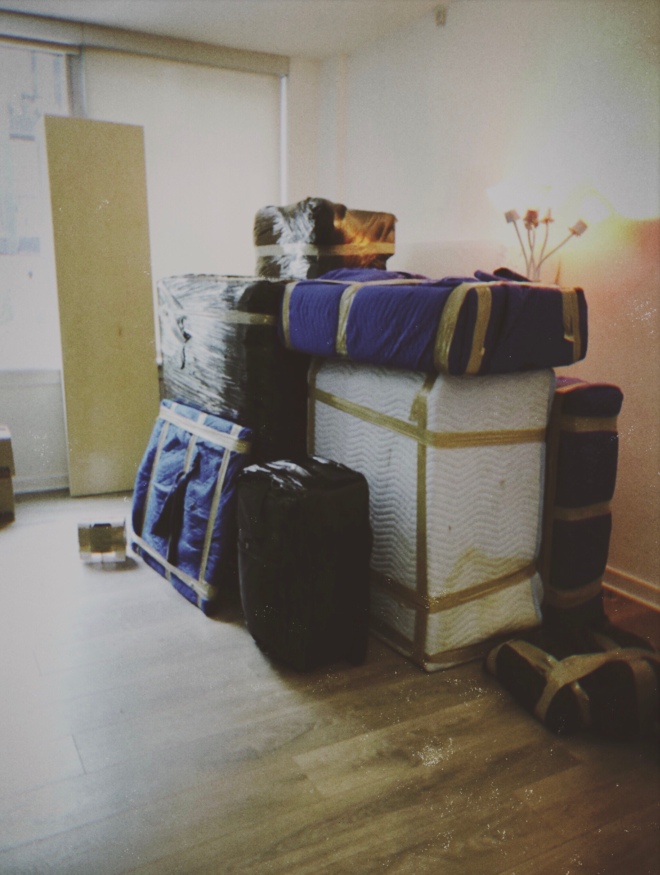 Stuff …not everything makes it, but that’s okay…

Me and like many of my peers (i.e. urban dwelling millennials) have spent time in co-living spaces and then finally graduate to that first solo studio or apartment, and whereas in the process we accumulate through purchase or the never ending “free stuff because of I’m moving” postings — a shit ton of stuff.

“…contemplating WTH you’ll do with this couch, bed, and other grown up household stuff your hard earned capitalist dollars bought you.”

Alas, welcome to 6 years in a city where you first showed up with only a couple of suitcases and now as you prepare to leave are contemplating WTH you’ll do with this couch, bed, and other grown up household stuff your hard earned capitalist dollars bought you. Well spend more of those dollars (or your employers if so lucky) to ship it across country to your final destination if you can, or simply pass it to the next sucker or blessed person (all in perspective of course).

Pro-tip: forego movers from Craigslist at all costs if possible…and if not, have 2 others lined up in case — you’ll thank me and yourself later. 😉

“…my move isn’t driven by a new exciting work opportunity, but a more personal call…”

Since my move isn’t driven by a new exciting work opportunity, but a more personal call, I had to do both. Dish out the dollars to move, store and ship the “must-have” stuff, and for the remaining well you can guess — Oprah style giveaways.

“We’ll eventually continue to get more stuff and pass them on, as this is the cycle of stuff.”

With every move I typically ponder to myself, perhaps this a good opportunity to venture into a lifestyle of minimalism. And this time, I might actually do it, as the process of purging myself from things I realized were okay to leave behind (i.e. those dookie brown hella comfy house slippers of mine most people clowned but I kept in my collection circa 2011) — I was reminded simply again: stuff is just stuff at the end of the day.

We’ll eventually continue to get more stuff and pass them on, as this is the cycle of stuff. And maybe one day I’ll just stop moving all together, and unapologetically let the stuff pile up.

About the Author
Mariel Kanene is Founder and Editor of TheArtOfPersptive.co and lead storyteller with a focus on people, place and purpose. His passion for storytelling was born in Kinshasa, Congo, groomed in Dallas, Texas, and cultivated in Washington, DC where he now resides. By day, Mariel spends his days slowly trying to change the world—one meaningful interaction at a time. When Mariel is not in the office, he spends his free time in athletic pursuits from weightlifting to yoga, swimming, and martial arts.  He loves good conversations over good coffee and even better rum. He hates talking about himself in third person. Thanks for stopping by. Always appreciated. Twitter | Instagram | Linkedin .